The COP26 climate conference in Glasgow delivered promises to keep the world on the 1.5-degree pathway as well as long-awaited rules for market-based cooperation under Article 6 of the Paris Agreement. This cooperation is also available for voluntary carbon market actors. In Glasgow, the Nordic Dialogue on Voluntary Compensation convened timely discussions on the role of voluntary carbon markets in the global net-zero transition.

One of the key results of the COP26 climate conference, which concluded in Glasgow on 13 November, was the adoption of the long-awaited rules for operationalising market-based cooperation under Article 6 of the Paris Agreement.  Detailed rules will be developed over the coming years.

Market-based cooperation under the Paris Agreement is also available for voluntary carbon market actors. According to the rules adopted in Glasgow, host countries can authorise mitigation outcomes for use towards other countries’ mitigation pledges (Nationally Determined Contributions, NDCs) as well as for other purposes, including for voluntary compensation. Authorised mitigation outcomes will not be counted towards the host country’s own NDC. A new international crediting mechanism was also launched. Activities already registered under the Clean Development Mechanism (CDM) were allowed to seek registration under the new mechanism, carbon credits issued before 2021 under the CDM were allowed for use towards countries’ first NDCs.

Towards and beyond carbon neutrality – What role for voluntary carbon markets?

The Nordic Dialogue on Voluntary Compensation (“the Dialogue”) co-hosted a panel discussion with the Nordic Council of Ministers on the role of voluntary carbon markets in non-state actors’ efforts towards and beyond carbon neutrality on 9 November at the Nordic Pavilion. The recording of the event is available here. 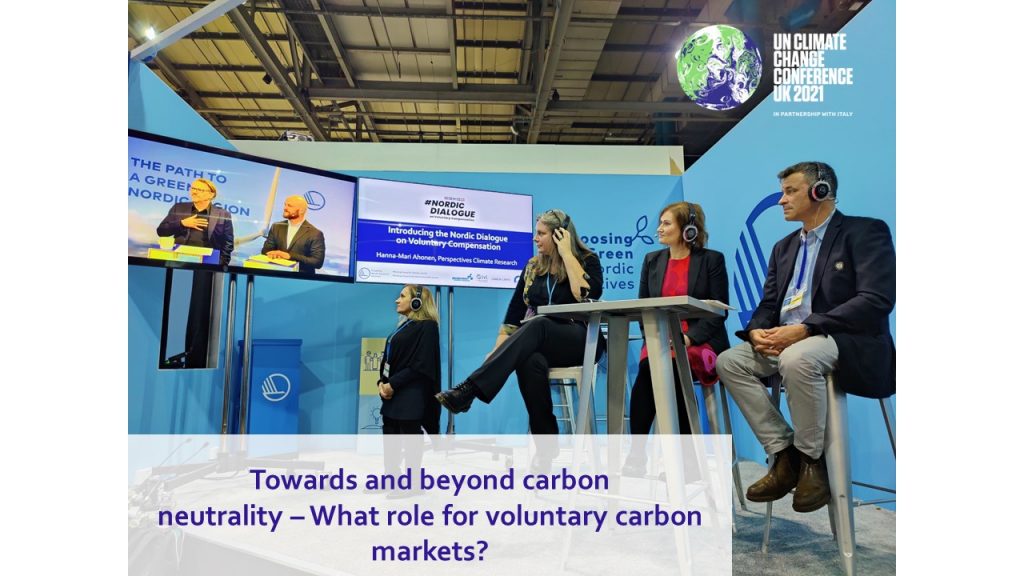 Hanna-Mari Ahonen, Senior Consultant at Perspectives Climate Research, noted that, according to a recent survey, Nordic stakeholders welcome companies’ climate targets and claims, but find them hard to understand and compare. The Dialogue aims to address these challenges by fostering a common understanding of key concepts and co-creating a Nordic approach to high-integrity voluntary compensation together with Nordic stakeholders, complementing national and international initiatives. Hanna-Mari noted that the Dialogue’s new report explains key concepts, such as net zero and carbon neutrality, and maps international guidance on best practices in voluntary compensation.

Helen Mountford, Co-Chair of the Task Force on Net Zero Goals and Carbon Pricing, noted that the number of net-zero pledges has increased rapid in the past two years. According to Helen, their inconsistent use is creating confusion and mistrust. She stressed the importance of addressing greenwashing concerns raised by the youth movement and activists and the need to improve the consistency, transparency and credibility of companies’ targets. She highlighted the Science-Based Target initiative’s new net-zero standard as an important tool for ambitious corporate target-setting and accountability. To achieve net zero, only a small amount of residual emissions may remain and should be counterbalanced by permanent removals in the target year. Along the way to net zero, Helen noted that companies are encouraged to purchase carbon credits to compensate for their remaining emissions through additional investments in mitigation beyond their value chain. She stressed, however, that this should complement their own efforts to rapidly decarbonise their value chain as much as possible. She emphasised that there is no more space for the traditional use of offsetting as a substitute for own mitigation.

Mark Kenber, Co-Executive Director for External Affairs for the Voluntary Carbon Markets Integrity Initiative (VCMI), fully supported the points raised by Helen. He emphasised that we are now in a new world, while recognising that offsetting was done in good faith in the past. Mark noted that VCMI is working with various initiatives to create a rigorous and understandable set of claims that companies can make about their climate actions, when they go beyond what they can achieve within their value chains. The VCMI aims to both prevent false claims and facilitate high-integrity claims. Mark concluded that the use of voluntary carbon markets can be a great thing if – and only if – it is additional to corporate decarbonisation efforts and countries’ NDCs, and it is based on investments in activities that are driven by the communities’ and the host country’s needs to accelerate climate action.

Matti Kahra, Senior Climate Specialist at Nordea, one of the biggest banks in Europe, said that Nordea has committed to reducing its portfolio emissions by 40-50% by 2030 and becoming a net-zero bank by 2050. He outlined three dimensions of net zero and carbon neutrality that are relevant for Nordea. Firstly, since all loans and investments made by Nordea need to be net-zero by 2050, Nordea needs to understand all of its customers’ plans regarding their transition to net zero, including the role of offsetting in their journey. Secondly, Nordea could provide financing for mitigation activities that generate carbon credits for the voluntary carbon markets, including Nordic companies and start-ups active in the voluntary compensation space. Thirdly, the bank aims to become carbon positive by 2030, including by using offsetting. Matti noted that Nordea’s annual procurement of some EUR 2 billion worth of goods and services provides further opportunities to promote carbon neutrality. He stressed that initiatives that promote integrity, comparability and transparency are very important in helping banks and other stakeholders to understand the current heterogenous landscape.

Kari Hämekoski, Senior Programme Manager at the Nordic Environment Finance Corporation and manager of the Nordic Initiative for Cooperative Approaches, highlighted that, if robust rules are in place, market-based cooperation can deliver win-win-win benefits relating to ambition-raising, sustainable development and cost-effectiveness. He noted that market-based cooperation can be used to promote specific priorities, such as the Nordic priority of gender equality, and it can also serve as a buffer against uncertainties in own plans and actions. Kari emphasised that the private sector is key to implementing action on the ground and that Article 6 can incentivise private sector investments in mitigation, not only based on projects but also broader programmes and policies.

About the Nordic Dialogue on Voluntary Compensation

The Nordic Dialogue on Voluntary Compensation (“Dialogue”) aims to inform Nordic and international stakeholders on using voluntary compensation as part of their broader efforts towards and beyond carbon neutrality.

The Dialogue aims to promote the high integrity, transparency and harmonisation of voluntary compensation, and alignment with the principles and long-term goals of the Paris Agreement and the United Nations Sustainable Development Goals. It brings together Nordic public and private stakeholders to foster a common understanding of key issues and concepts relating to voluntary compensation and co-create recommendations and action points for a Nordic best practice approach to voluntary compensation.

The Dialogue is funded by the Working Groups for Climate and Air (NKL) and Environment and Economy (NME) of the Nordic Council of Ministers. The Dialogue is managed by Perspectives Climate Research in partnership with Carbon Limits, IVL Swedish Environmental Research Institute and Tyrsky Consulting.

For more information on the Nordic Dialogue on Voluntary Compensation, visit our website, join our mailing list, follow us on Twitter (@Nordic_Dialogue, #NordicDialogue) and read our brochure, FAQ and the Nordic report “Voluntary compensation of greenhouse gas emissions – International guidance and initiatives”.

Twitter
Copyright © 2023 Nordic Dialogue
We use cookies on our website to give you the most relevant experience by remembering your preferences and repeat visits. By clicking “Accept All”, you consent to the use of ALL the cookies. However, you may visit "Cookie Settings" to provide a controlled consent.
Cookie SettingsAccept All
Manage consent

This website uses cookies to improve your experience while you navigate through the website. Out of these, the cookies that are categorized as necessary are stored on your browser as they are essential for the working of basic functionalities of the website. We also use third-party cookies that help us analyze and understand how you use this website. These cookies will be stored in your browser only with your consent. You also have the option to opt-out of these cookies. But opting out of some of these cookies may affect your browsing experience.
Necessary Always Enabled
Necessary cookies are absolutely essential for the website to function properly. These cookies ensure basic functionalities and security features of the website, anonymously.
Functional
Functional cookies help to perform certain functionalities like sharing the content of the website on social media platforms, collect feedbacks, and other third-party features.
Performance
Performance cookies are used to understand and analyze the key performance indexes of the website which helps in delivering a better user experience for the visitors.
Analytics
Analytical cookies are used to understand how visitors interact with the website. These cookies help provide information on metrics the number of visitors, bounce rate, traffic source, etc.
Advertisement
Advertisement cookies are used to provide visitors with relevant ads and marketing campaigns. These cookies track visitors across websites and collect information to provide customized ads.
Others
Other uncategorized cookies are those that are being analyzed and have not been classified into a category as yet.
SAVE & ACCEPT